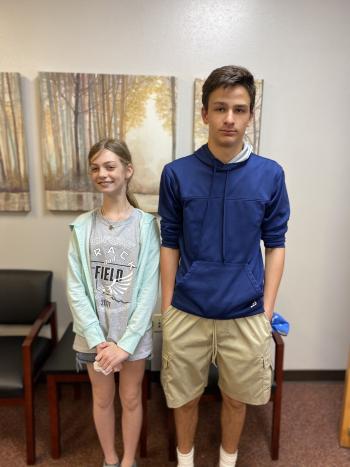 Middleberg Public School has announced the 8th grade valedictorian and salutatorian for the 2020-2021 academic year.  The 8th grade graduation ceremony will be held Thursday, May 6th at 7:30pm in the Middleberg gym. This year's class has eighteen graduates.  Aubrey Manning has been named the salutatorian for this year.  Aubrey is the daughter of Carla and Derik Sullivan and Joshua Manning.  Aubrey has been showing goats since she was two years old and has attended Middleberg for five years.  Grey Russell has been named the valedictorian for this year.  Grey is the son of Jason and Tiffany Russell. Grey has attended Middleberg since pre-k. He has participated in cross-country, basketball, and track. He has won numerous awards including regional and state titles in track.